Home Decor Ideas from Around the World For Your American Home! 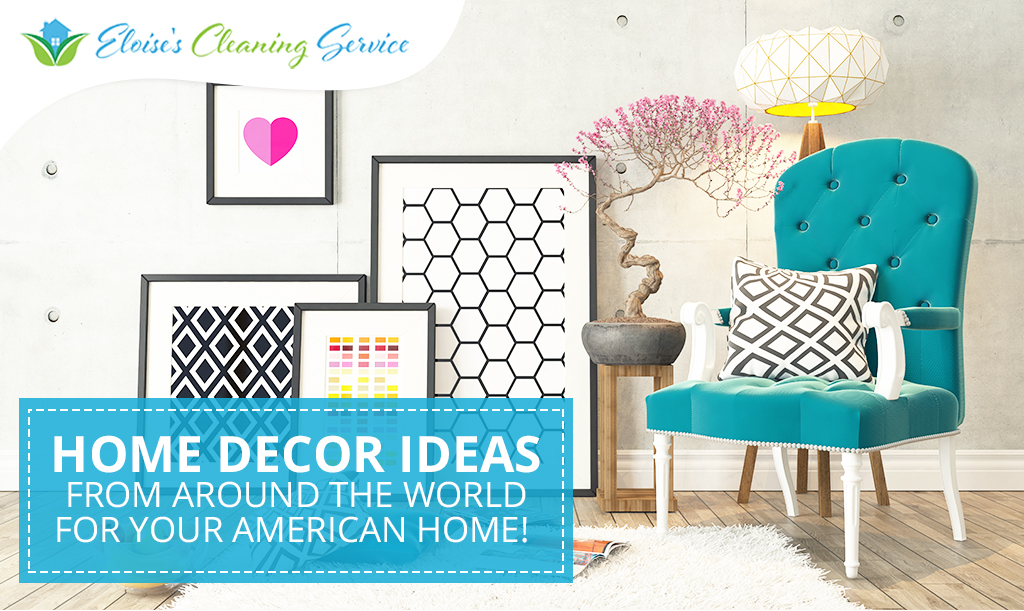 Home decor can be one of the purest expressions of who we are and how we feel at any point in our lives, and it’s no secret that it also influences your mood greatly, so having a unique style can do wonders for you.

If you have a wanderlust burning inside of you, there’s no better time than now to adopt and adapt many fantastic home decor ideas and trends from around the globe to affirm that worldly feeling in your house. Break away from the traditional and look around the world for inspiration!

This beautiful hacienda kitchen, designed by Josh Houshmand, takes advantage of a room that is spacious, airy and completely drenched in natural light to adopt a one-colored sunny Mexican style instead of turning it into a multi-colored bomb that assaults the senses. Houshmand says that this yellow arrangement mixes the best of both countries, adopting a Mexican feeling while keeping it “totally American. It’s a pretty darn happy place to be.” We have to agree.

If you have an open enough kitchen, this might be a good idea for it, and the one-colored design will keep it from clashing with rest of your house decor. The best part? It’s super easy to clean!

A Bahamian throwback with a nautical feeling

Who knew such a haphazard style of displaying paintings would be so appealing? That’s the first eyecatcher of Amanda Lindroth’s Bahamas-inspired living room. The symmetrically-arranged potted plants and the Sunbrella-dressed 60s armchairs are a fantastic visual counterweight to the overlapping picture collection, giving the room a “very American and open and casual attitude”, as Lindroth describes it, without veering into chaotic territory.

“We collect paintings of the Bahamas from the late 19th to the early 20th century by notable American artists who passed through here in the winters — but if our daughter, Eliza, draws something, it might land there, too.” Taking this unorthodox arrangement of so many accent pieces for your house can take a load off the rest of the walls in whatever room you’re decorating, so it doesn’t overwhelm guests.

Greatly inspired by Art Deco, a visual style that combined sometimes contradicting visual elements in the search for modernity, this German trend continues on the tradition of using lavish materials like brass, silver, gold, and velvet. An air of excess that never goes near being tacky marks the predominant visual marks of New Elegance, as well as angular shapes and elegant gemstone colors.

According to Christine Bürg, Deputy Editor in Chief of ELLE Decoration Germany, this style’s key ingredients are “statement pieces such as daybeds or cocktail chairs, folding screens and dressing tables.”  If you have a taste for old-meets-new elegance with a certain panache and a hint of decadent flourishes, then this style is for you have what you need.

Gentrification in big Mexican cities has skyrocketed over the last few years, and this has pushed many of its inhabitants to strive for the preservation of vintage pieces that bring the past into a more modern, remodeled living space. In the above picture, we can appreciate this contrast between the wooden floors and concrete walls and ceiling.

Taking advantage of the modern living space, a few vintage accent pieces hold the place together, like the future finding its footing on the past. Michelle Griffing, Editor In Chief of ELLE Decoration Mexico, says of the style: “More and more, they want to stay away from the norm and give their spaces a personal touch.”

That these pictures look great doesn’t mean that you have to copy them exactly to have that style in your own house. All these rooms came to be by adopting and adapting, as we said in the beginning, so make sure that you find a balance between the style that you want and the rest of your home decoration, avoiding visual clashes and accentuating the strength of your piece.