What You Should and Shouldn’t Power Wash 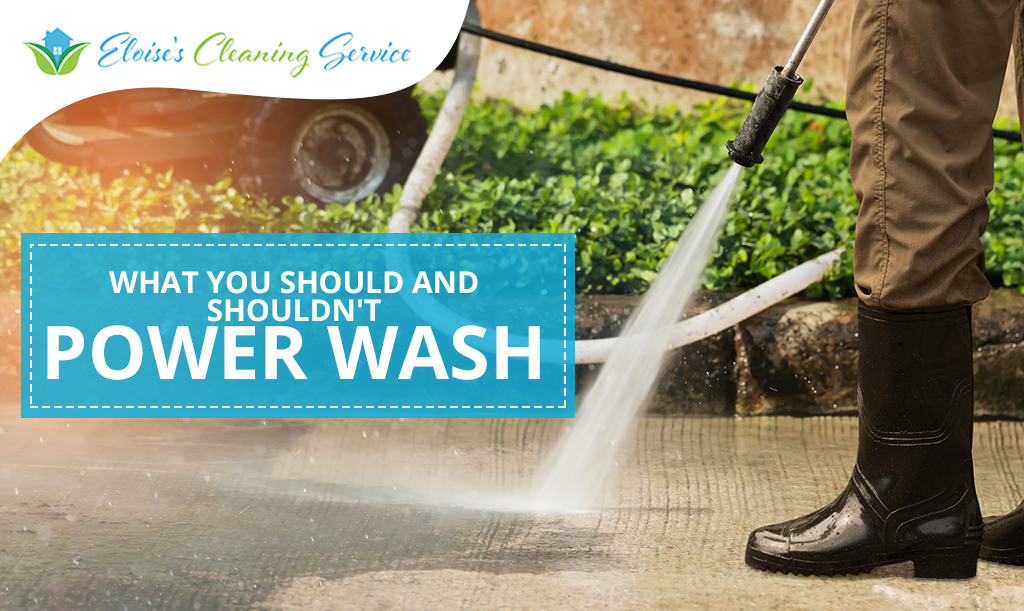 Power washing is spraying water under high pressure to clean up a variety of materials from the kind of nasties that a simple wipe won’t get rid off. In case you’ve never done it yourself but are planning on it, there are a few things you should be aware of before blasting that grime off, like what type of materials it’s safe to power wash and what others are better off cleaned by regular means.

Second of all, power washing and pressure washing might be used interchangeably by some people (especially on those oddly satisfactory videos on YouTube) but they’re in fact two different things, and mistaking them can lead to some very costly damages. Let us tell you about the differences between these two processes before we show you which materials are safe to power wash and which ones are not.

The difference between power and pressure washing comes down to the temperature of the water. While both use water released at a high pressure, sometimes mixed with chemicals or cleaning products, power washing utilizes very, very hot water, while pressure washing uses a regular temperature. The latter is well suited for a variety of building materials (provided they’re strong enough to resist a high-pressure water stream), while the former is better at killing mold, moss and other such pests growing in the crevices of your house.

What is safe to power wash?

Between the two methods, despite their similarities, power washing is the most heavy-duty option, and it’s best suited for large areas, like a long driveway, or wherever the grime, dirt, grease, moss, or mold buildup is too out of control because the hot water rips them right out. That’s one of the best uses for a power washer, and it should go without saying that you should only wash surfaces that can resist the high pressures and heat, regardless of whether or not you’ve mixed the water with other chemicals.

As for pressure washing, pretty much anything that you can clean with regular water is fair game, such as brick structures, patios, and decks, dirty fences, tiled roof, gutters, etc. Always remember to use the correct nozzle when power/pressure washing: a 0-degree nozzle hits the hardest and is better suited for hitting mold, caked-in dirt, very old stains, etc.; a 40-degree nozzle, with its extra-wide spray, should help you with large surfaces, such as driveways, patios, house siding, and others.

What’s not safe to power wash?

Asphalt roofs – It’s never a good idea to use pressurized water on an asphalt roof because you’ll outright destroy it with the pressurized water. The granules will be washed right off. and the integrity of the whole thing will be gone, so it’s best to look into alternatives if you really want to clean the roof.

Painted surfaces – Painted items can be washed, but if you’re inexperienced, a single mistake means you’re just gonna wash the paint right off, or at least damage it considerably. In this case, it’s better to call an expert to do the job for you.

Electrical equipment – Things such as electrical panels, meters, and other equipment are better off being washed with other methods. Why? Well, water and electricity are never a good mix; even if the power’s cut off, you’ll do terrible damage to the internal circuits.

Cars and bikes of any kind – A car/bike is one big painted surface housing a bunch of delicate interiors, and those are two things you never wanna mix with a power washer. On the outside, you might strip off the paint, while on the inside, you can introduce rust, de-grease something that’s supposed to be greasy or oily, or even break something off.

People, plants, pets – Think the damage from power washing is bad on a roof? Any living creature is a big, flashing-red no for power and pressure washing. The pressure and high temperatures of the water are usually high enough to at least hurt and cause serious injuries at the most, so don’t go around spraying people or animals (especially small ones), even if you’re joking.
Inside the house – Power washing a house interior is usually too drastic a solution for such a simple problem. Instead of power-damaging your house to clean it, how about calling the experts?