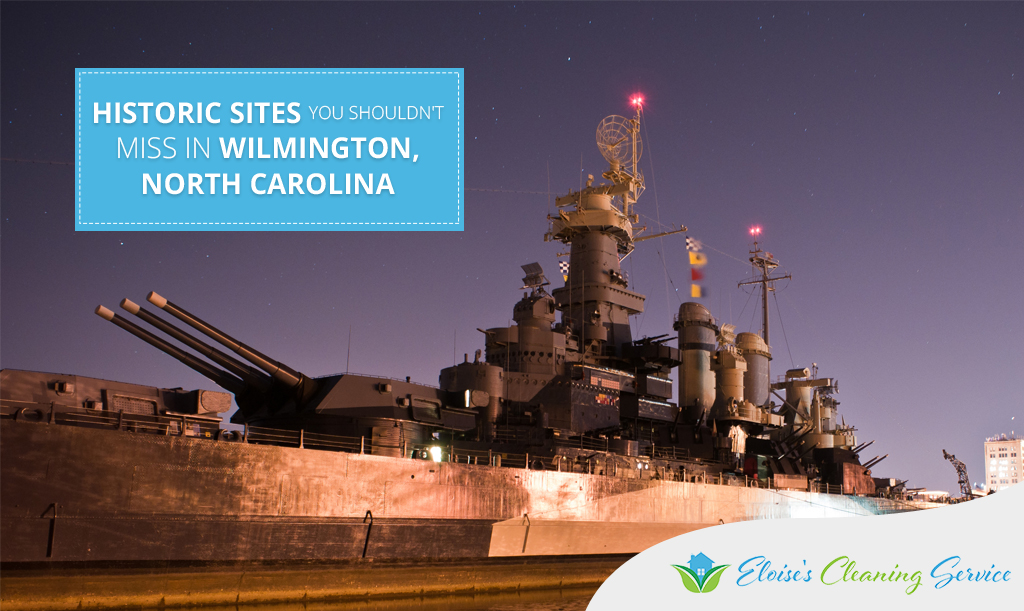 The city of Wilmington, North Carolina is one of the premier destinations on the East Coast for discovering American history, all while enjoying tranquil beaches and fine dining. It has a historic district of beautiful antebellum homes and colonial-era blocks. The city’s most attention-grabbing site (it’s not hard to miss) is the enormous Battleship North Carolina, a WWII-era warship that is open to tours. There are so many historical places you can enjoy and soak in here in Wilmington.

Check out these historic sites, and you’ll find plenty of things to do in Wilmington NC today!

Cape Fear Museum is home to the collections of Confederate objects and souvenirs. It has expanded over the years to hold more than 52,000 items relating to national, regional, and international history. Its particular focus on the environment of the Lower Cape Fear and the Michael Jordan Discovery gallery allows kids to interact with nature using their senses.

In 1961, the World War II battleship was tied in Wilmington, but it is now a floating memorial to North Carolina’s veterans. If you want to take a look, visitors may tour one of the ship’s bridge, 16-inch gun turrets, crews’ quarters, engine room, and other facilities. Most of its exhibits represent the other warships that have carried the name “North Carolina,” including the modern attack submarine.

There are nearly 500,000 visitors who tour this state-maintained Civil War battle site each year.  Hailed as the “Gibraltar of the South, its earthwork complex guards the New River entry to the Cape Fear River allowing blockade runners to slip in and out of Wilmington.

The Brunswick Town is the remains of Southeastern North Carolina’s first town. It was abandoned mainly during the Revolutionary War, and it can still be seen, including the haunting ruins of St. Philip’s Church. Also on the site is a substantially intact Confederate river fort. The tourists’ center includes artifacts like a Confederate flag, which flew over Fort Anderson.

The townhouse was built around 1770 and is one of the oldest structures still standing in Wilmington. It is operated by the National Society of the Colonial Dames of America in the State of North Carolina. The house gives period exhibits, restored gardens and a look at the foundations of the Colonial jail, which stood on the site.

The center is run by the Federal Point Historic Preservation Society, which holds displays on the history of  Kure Beach, Carolina Beach, and the Fort Fisher area, as well as a small bookstore and gift shop.

This townhouse was created just before the Civil War and is regarded as one of the best  models of antebellum architecture in North Carolina. It is operated as an architectural museum. The restored servants’ quarters in the rear offer a rare view into slave life.

In 1852, this merchant’s house was completed and is now the headquarters of the Lower Cape Fear Historical Society. It also operates as a museum of Victorian life. The society sponsors periodic exhibits and conveys themed walking tours of the downtown area.

While exploring the rich history of Wilmington, North Carolina, you can hire a professional house cleaning service to keep your home spotless. These historic sites will help you gain knowledge about this place’s past.